We were, at last, able to welcome, from Glasgow, Dr Susanna Harris to speak about the ten years of work by the Archaeology Department of Glasgow University on the Must Farm textiles.  The Must Farm site is located on the Fens not far from Peterborough but is now closed.

The settlement was built on stilts over a waterway, log boats and fishing hurdles have been discovered in the silt which has preserved the remains.  The houses had burned down but the roof timbers arranged in a circular fashion were discovered. 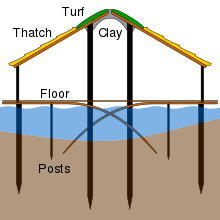 Dendrochronology on the timbers reveals the date of the settlement to be about 850 BC recognised as late Bronze/early Iron Age.  Nests of pots, unfired ceramics, beads, weapons, tools, whorls for spindles and weaving weights were discovered.  The most significant textile finds, preserved by the acidic nature of the silt were plant based examples of bast such as flax and lime tree fibres.  These appeared as spools and balls of yarn and textiles created buy knotting, weaving and twining.

With the aid of electron microscopy and CAT scanning archaeologists were able to determine, as well as the nature of the material, the thread count of the fine quality fabrics, (16-25 threads/cm) and the diameter of the threads (0.1-0.3mm) and the internal structure of bundles and parcels of thread.

Although the site is now permanently closed there is a reconstruction of the houses at Flag Fen Archaeological Park, artefacts in Peterborough Museum and plentiful information to be reached via Google.  Good illustrations here: http://www.sci-news.com/archaeology/must-farm-bronze-age-settlement-04031.html

Many thanks to Dr. Harris for her most interesting account and for taking the trouble to travel from Glasgow to talk to us.  The event was planned for last year but…so many thanks also to Ann for her perseverance in ensuring that the talk eventually took place!

The North Cheshire Guild met at Croft on 26th September for the first time in 19 months and the 20 members present had a lovely time. We had a focus on Peg Loom Weaving, with several members bringing their looms and we also looked at a Woven Rag Rug Loom made by Flo from a wooden pallet. 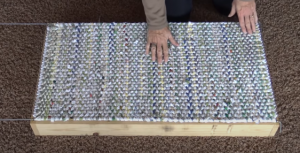 Thanks go to Janet for providing the introduction and some useful notes and to Flo for the woven rug technique.

We are very fortunate that the Hall at Croft is a clean, well ventilated, spacious venue and with a few common-sense precautions we can keep each other safe.  Our Covid Risk Assessment is reviewed each month and circulated to members.  We are operating a Track and Trace system by asking people to sign in on arrival. 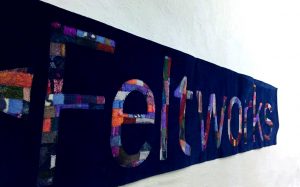 Tyra and Ruth, both members of Leek Guild, gave a Zoom talk about their exhibition which, after three years of planning, was due to run for eight weeks. Sadly, when the 2020 Lockdown struck, their work was on display for only eight hours! They won’t be mounting another exhibition because of the work involved, but they did sell a lot of pieces even in a short time.

Ruth, a retired textile teacher, has a fascination with wool fibres and aims to inspire others through her mainly 3D felted pieces.

Tyra has been an artist all her life. She designed museum exhibitions for 25 years and produces 2D felt artworks inspired by animal and plant cells under the microscope.

Planning began with the following questions- What? Why? Who with? When? Where?

Project Management would be the next stage, including a Gantt Chart- a detailed schedule of works on Excel including every job and when it had to be done.

Marketing included photography of their work, designing adverts and a Press Release, whilst Events included the Preview, Meet the Artists, Private Groups and Workshops.

Other things taken into account were Pricing, Labelling, Set up, Stewarding and Artists’ Statements.

The Foxlowe Arts Centre, Leek, has a well-lit gallery which would be stewarded, so Tyra and Ruth

submitted photos and went before the Exhibition Committee, who approved their application. They set out a contract setting out what they would expect and they joined the Artists’ Network

( https://www.artistsnetwork.com/ ) so they could insure their work for a reasonable price.

Ruth is an expert at felting, producing a wide range of items from large felted fleece rugs to beads and crazy birds with driftwood heads. We saw scarves made using a delicate technique, Nuno felting onto fabrics such as chiffon or muslin.  Ruth pointed out that no sheep were harmed in the making of the rugs! 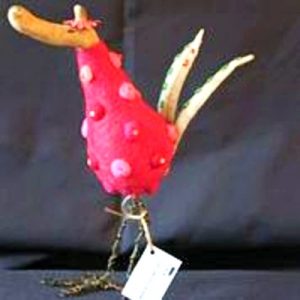 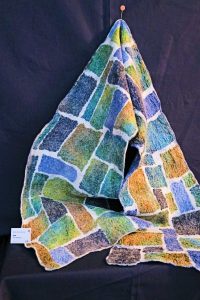 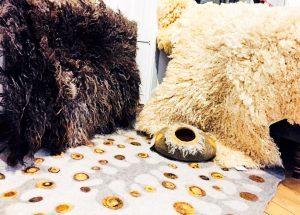 Tyra concentrates on large, wall mounted artworks, sometimes making use of pre-felting, but she also makes smaller items such as table mats. 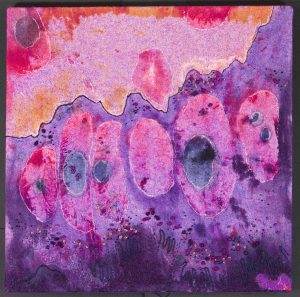 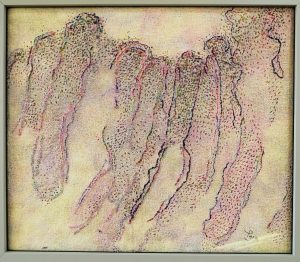 We looked at intriguing items, including neck ornaments made from Hotchpotch Yarn (pull apart a selection of fibres, mix them, pull apart several times and spin for a chunky textured yarn which needs to be fiercely washed) and core-spun LEDs!

For the making of the large felt works, Ruth and Tyra went to Felt in the Factory, a fully equipped, dedicated felt making studio near Ross on Wye, where you can make as much mess as you like!

The exhibition looked stunning, and it was very sad that Lockdown brought it to an abrupt halt.

Have a look at their photos on the following link-

We had a fascinating talk and looked at some lovely and varied pieces whilst gaining a good insight into the complications of organising an exhibition. 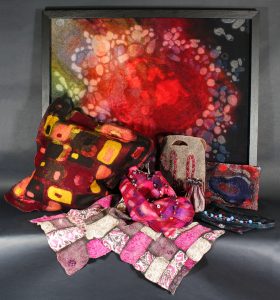 Last Saturday Liz was talking about her Yarnshifter, an adjustable, portable weaving frame for producing squares, triangles or diamonds which she bought at The Harrogate Knitting and Stitching Show, probably in 2003. 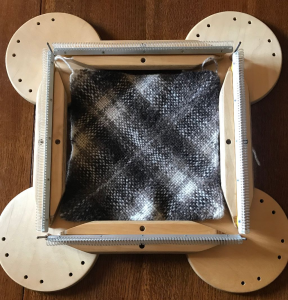 The couple who used to produce them are no longer in business, but a Yarnshifter was up for sale on Ebay recently.

Unlike traditional weaving using a series of warps linked together by the weft, Yarnshifting uses a continuous ball of yarn which acts as both the warp and weft combined, and the following video will give you an idea of the technique.

https://www.youtube.com/watch?v=w2dBsmq0H7c – How to Weave a Hexagon on a Pin Loom.

Liz was working with Jacob fleece which she’d divided into cream, pale grey/brown and dark brown. This was spun keeping the colours in blocks, then Navajo plied to give a variegated yarn which produced a tartan square without needing to weave in any ends where the colour changed.

Liz had also, woven two diamonds with textured silk yarns, and is now encouraged to change the shape of her frame so that she can continue with that project.

Our volunteer  for the proposed flax spinning demonstration was, unfortunately, indisposed.  Ann (our programme secretary) stepped in at the last minute and organised a macramé workshop.  We hope to be able to present flax spinning at a later date.

Thank you very much to Ann for patiently taking us through the basics of macramé. Demonstrating from her ‘Studio’ in a spare bedroom, Ann managed to set up her phone so we could see what she was doing with her hands, and also have her laptop going simultaneously so she could see us. We were aiming to make three simple plant pot holders, which took longer than expected because we spent a long time measuring cord and getting to grips with the basic knots. Ann had the working cords looped over a hook hanging from a bunk bed, whereas I looped mine round the knob of a chair. She had already sent out comprehensive notes with clear diagrams of basic knots, and I found it very helpful to have half an eye on the notes and half an eye on Ann’s demonstration.  I was particularly pleased with my second plant pot holder which was the perfect size for a sturdy jam jar which I’m going to fill with flowers. It’ll look very pretty hanging up with some bunting (made from my extensive stash of material) for my sister’s 60th birthday celebration in our garden.

Those members not wanting to take part in the macramé workshop carried on with their own projects and had a bit of a chat, so we passed a very pleasant day with a lot of good humoured banter.