We were so pleased today to welcome long serving Guild member, Judy Jones, to talk about her work for the Bradford Weaving Diploma.

Astonishingly, Judy completed the work, including summer schools, exams and study weekends,  in one year. Judy had  background knowledge from her City and Guilds studies but even so to complete the work in that time frame was an amazing achievement.

Apart from weaving the work included spinning, plying, creating fancy arms in a variety of fibres and both natural and chemical dyeing all of which had to be planned, resourced, recorded and displayed.  Bear in mind this was 1985 before the days when everyone had word processors, computers and dictation facilities on phones and all had to be meticulously typed out. The work is beautifully mounted on A1 boards with construction notes and drawdown diagrams skilfully hidden beneath each piece of work. 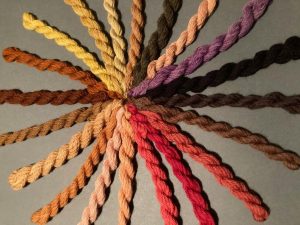 Every type of fibre had to be included animal, for example, wool, silk and the camelid family, vegetable fibres of all types and synthetic fibres. Initially weaving was done with a straight entry threading (1,2,3,4 repeat) on a four shaft floor loom . Colour inspiration came from photographs from which colours were selected and a wrap created. 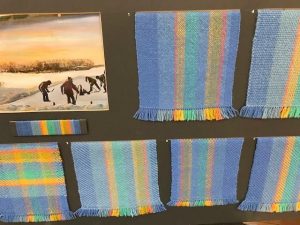 It is astonishing the variations that can be created using different weft on the same warp (look at the fringes to see that the warp stays the same).  Later work included more complex weaving including overshot, double cloth and Bedford cord. 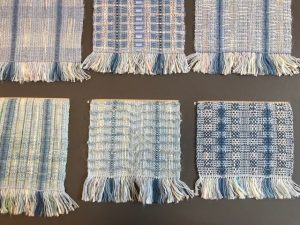 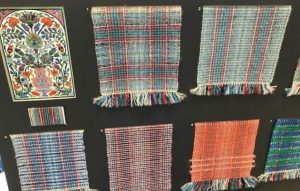 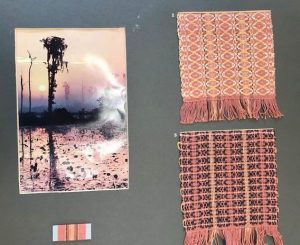 The finished purpose of the weaving had to be stated and Judy created examples of garments and upholstery fabric from her work.

Inspiration was also gained from eye catching examples in her surroundings, this from linen-fold panelling in a restaurant: 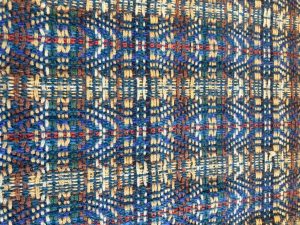 There were also extensive examples of different braids.  Some worked on and inkle loom ,  some plaited and tablet woven examples of worldwide braids including Mexico, India, China and Egypt. 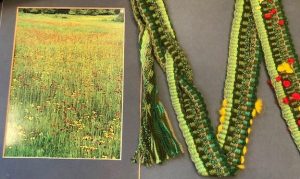 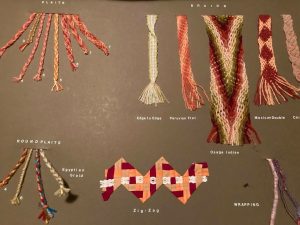 A huge thank you to Judy for sharing this inspirational work and to Chas who has recorded the talk on video and is experimenting with editing and transferring the talk onto ‘modern devices’ so we may share the talk again in the future. Hopefully, ‘in-house skill sharing sessions will be able to be recorded in the same way and re-visited on future occasions.

Rigid Heddle workshop with professional tutor Alison Dakin. A few places left at £20, contact secretary at address below for details

Non participating members free to 'do their own thing' as usual.

Visitors welcome, not for the workshop. (£5 fee)